The Demimonde is thrilled to share another amazing release with you...FRACTURED SOUL by Rachel McClellan. Here's an intro to her new book as well as a refresher on the series opener FRACTURED LIGHT. Best wishes, Rachel! 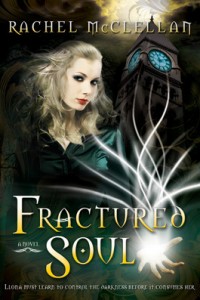 Llona will do whatever it takes to protect her new found friends and home, but the dark plot threatening Lucent Academy, a school that’s supposed to be a safe place for Auras, may be too powerful for even Llona to defeat. This fast-paced tale of love, loyalty, and overcoming the darkness will keep you on the edge of your seat until the last page!
What others are saying:
“I love these books! A kick-butt heroine and a hottie love interest, with a refreshingly original concept. Be prepared—once you start, these are hard to put down.”
—Paula Cotton, book reviewer at ReadingLark.blogspot.com
“Fractured Soul is a brilliant sequel, exceeding even the remarkable first book in the series. It will haunt your every waking moment between the times you’re reading it, and it will stay with you long after you’ve finished. It’s an amazingly well written and engrossing story that I highly recommend—after you’ve read the first one, of course.”
—Cindy Bennett, bestselling author of Geek Girl & Rapunzel Untangled

EXCERPT from FRACTURED SOUL
“FRACTURED SOUL” EXCERPT:
After a minute I peeked around the trunk. Not far away a form moved in and out of the shadows. I couldn’t sense if the thing was Vyken or human, but the moment it stepped into the light of the full moon, and I saw its face, I knew it was a Vyken. And by its slender form, I guessed a woman, but I couldn’t tell by the face, which was missing half of its leathered skin. The other half was a rotted skull with a green, moss-like substance clinging to the cheekbone. The bone was a dirty yellow, the same color as her two rows of broken teeth.
She looked around and sniffed like she was searching for something. Her eyes jerked to the tree I was hiding behind. I ducked farther behind it and held my breath, my heart pounding and sweat breaking on my brow. Any other day I would’ve jumped at the chance to fight, but I was still too afraid of what Liam had told me and of what I already knew. Was I seeing my future?
“I smell you, Aura,” the woman said. Her voice was deep and raspy.
I left my hiding spot and ran as fast as I could, crashing through the forest, arms outstretched. I pushed my already exhausted legs hard as I hurdled over, under, and around what felt like an Amazon jungle.
The Vyken chased after me, making a strange sound with her throat, almost like a pig grunting. I looked back at her and saw that the sound was from the wind moving between exposed cords on her neck where there was no skin. The sight and sound of her made me find a second wind, and I sped up.
Bursting through a tall bush, I moved to take a step but found nothing but air. I fell, more like bounced, end over end down a steep hill. I didn’t stop moving until I landed in cold water. I sucked in air and quickly stood up. In front of me was a lake the size of a football field. Moonlight stretched across it like a lit-up road. I looked around. Other than a steep incline around the water’s edge, most of which was covered in trees and bushes, there was no easy way around it.
I thought about climbing back up the hill, but even as I thought it, I heard the female Vyken coming closer. Having no other choice, I moved farther into the cold water until, once again, my foot found no ground beneath me. A sharp drop-off plunged me into the water. I gasped at the shock of it and swam backward to keep my eyes on the top of the ridge.
Just then the hunched-over female appeared. I took a deep breath and dipped beneath the water’s surface. A few feet away I spotted a branch attached to a fallen tree lying at the bottom of the lake. I swam over and took hold of it to keep me from floating up.
Through the clear water, I could just barely make out the Vyken’s form as she made her way down the incline. When she reached the water’s edge, she paused and scanned the surface. After a moment, she turned and began to move back up the hill. Just in time too because my lungs were burning.
I was about to push up when all of a sudden she stopped and turned back around. I bit the insides of my cheek to keep from instinctively taking in a breath.
She returned to the water’s edge, and what she did next had me frantically looking around for an escape. Her black boot slid onto the water’s surface, and as soon as it touched it, the water beneath her foot turned to ice. Another step. More ice. An ice bridge was being created wherever she moved. Ten more steps and she’d be standing directly above me.
Although I was terrified, my lungs no longer cared. I let go of the tree branch and began to float up, but just as I was about to break the surface and gasp for air, something took hold of my ankle and pulled me down.
﻿

About Fractured Light (Book #1)
Llona Reese is used to living on the run. After the Vykens killed her parents, she knew they would eventually come for her too. She can’t take any chances. But when she starts to make friends for the first time in her life, she gets careless and lets her guard down. Big mistake.
As an Aura, Llona can manipulate light and harness its energy. But if she wants to survive, Llona will have to defy the Auran Council and learn to use her power as a weapon against the Vyken whose sole desire is to take her light. Now she’s caught in something even bigger than she can understand, with a power she can’t wield, and no one she can trust, except, just maybe, a mysterious stranger.

Rachel McClellan was born and raised in Idaho, a place secretly known for its supernatural creatures. When she's not in her writing lair, she's partying with her husband and four crazy, yet lovable, children. Rachel’s love for storytelling began as a child when the moon first possessed the night. For when the lights went out, her imagination painted a whole new world. And what a scary world it was…

Rachel wants to give a copy of her book to one of the Demimonde readers....just leave a comment with your name and email and you can win an ebook of FRACTURED SOUL! Be sure to tell us what format you prefer...
Thanks again, Rachel, for sharing your incredible series with us!
Posted by Ash Krafton | @ashkrafton at 7:17 AM