Eternal life isn't a gift...you have to steal it. #TheHeartbeatThief on sale #99c

And...because one sale isn't enough for a hungry reader...

THE BOOKS OF THE DEMIMONDE
urban fantasy trilogy

Get BLEEDING HEARTS, BLOOD RUSH, and WOLF'S BANE
on Kindle for only 99c

the faster you get there, the better the price! 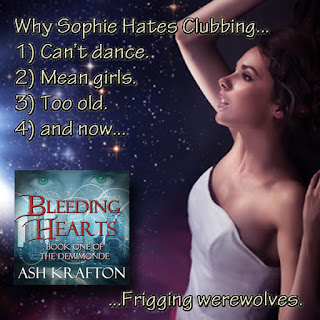 Posted by Ash Krafton | @ashkrafton at 4:00 AM No comments: Links to this post

No matter which holiday you observe at year's end, they all share something in common: traditions. I grew up in the four seasons of northeast Pennsylvania, where Decembers were snowy and cheer-filled. We wore skiddoos and went sleigh-riding and came in the door pink-nose and snow-crusted.

On Thanksgiving night, the borough would light the holiday street decorations for the first time. We'd sit at the front windows, cheeks against the glass, straining to see down the block to the main street, waiting for the moment the bells and candy canes would light up. Those lights meant one thing:  Christmas was almost here!

Some of my fondest memories are from our family Christmases, which were brimming full of special traditions. Many of them came from my Polish grandparents, involving the crèche and the special Christmas Eve dinner. I think that I will forever see Christmas through the lens of my dad's old 8mm camera, sounds of laughter and singing replaced by the whir of the projection reels and the occasional comment about our early-seventies fashion sense.

Holidays have always held sentimental value, a sense of community and family and simple togetherness—not just for my Pennsylvania family in the plaid-stricken seventies, but for so many people and places, across the span of centuries.

In my voracious research of the Victorian era (while writing my historical fantasy THE HEARTBEAT THIEF), I encountered an entirely new world of Yuletide traditions. Some are still widely celebrated (thanks to Doctor Who Christmas specials, my kids adopted a love for crackers) while some have largely fallen out of practice (such as a parlour game called Snapdragon, which seems like a good way to get a burned finger! Talk about dangerous drinking games…)

One Victorian tradition that has always appealed to me is Wassail. A verb, to wassail means to go singing door to door, after which one is invited to drink punch from the family's Wassail bowl. A noun, wassail is the punch itself—and every family had their own recipe (kind of like Boilo recipes here in northeast PA). The punch was served in a wassailing bowl. A greeting, "wassail" was a wish for good health to those we cherish. Everyone would drink the hot spiced cider together, fostering a lovely sense of community and togetherness, which is the truest spirit of the holidays.

Since immersing myself in the culture and traditions of THE HEARTBEAT THIEF, I wanted to find a recipe for my own family and promptly found about six million different versions (thanks, Google). They all seem to have a few elements in common, though: apples, spices, and warmth. Some contain ale or wine while others are more kid-friendly; some involve baking whole apples and placing them in the punch bowl; some even contain a whipped egg mixture (like this one from Alton Brown. Considering he is the Einstein of food, I would NEVER refute his wisdom.)

I like this one the best, though—the tanginess of orange juice and the lemony zing of fresh ginger make my mouth water just thinking of it. Plus, the convenience of a slow cooker is a must with my crazy schedule…not to mention that it's like potpourri you can drink while warming your hands! All wonderful things, especially when the weather turns chilly and grown-ups are stuck in the house, too old to go sleigh-riding or playing outside in the snow.

(Recipe from A Spicy Perspective)

Directions:
1. Place all the ingredients in a slow cooker and cover.
2. Turn the slow cooker on high heat and cook for 3-4 hours, until the color has darkened and the fruit is soft. Remove the tea bags and serve hot.

Maybe when my kids are older, I'll adjust the recipe to a more adult version. For now, I'd like to make something the whole family can enjoy. It's tradition, after all, and where's the fun in a tradition that excludes some of us?

Happy holidays, everyone. Be sure to raise a glass to your loved ones!

My Victorian fantasy THE HEARTBEAT THIEF follows the journey of the Forever Girl, Senza Fyne. Terrified of death, of growing old, of being forced into an arranged marriage, she makes a deal with the mysterious Mr. Knell and learns the secret of eternal youth and beauty…

I can picture Senza at a Christmas ball, in high London society, her hair upswept in a pile of curls the color of winter fire, her forever 18-year old figure trimmed out in a luscious gown of emerald silk and taffeta. She'd be the girl with whom every gentleman must dance, the one with whom everyone sought introduction. If you were lucky enough to speak with her, she might treat you a glimpse of her wit and wisdom, far beyond her years…to the sound of her charming laugh…and perhaps she'd touch your hand in a personal gesture.

One touch, and your heart might skip a beat. An entire dance and you just may be left reeling, your senses spinning. Senza Fyne tends to have that effect on a person…

Soon it would be time to gather around the wassail bowl, the spicy sweet scents of apple warming the air, reminding us all of the bounty of harvest and fortune, the cheer of friends gathered for Yuletide. You might be tempted to raise a glass to her in particular…but your wish for good health would be better spent on someone else. Senza Fyne had no need for wishes, not when her immortal youth, beauty, and perfection were secured by the strongest of magicks.

But you wouldn't know that because it's a secret she'd never tell. If she did, the heartbeat thief would be caught.

Seek out THE HEARTBEAT THIEF

Haunted by a crushing fear of death, a young Victorian woman discovers the secret of eternal youth—she must surrender her life to attain it, and steal heartbeats to keep it.

In 1860 Surrey, a young woman has only one occupation: to marry. Senza Fyne is beautiful, intelligent, and lacks neither wealth nor connections. Finding a husband shouldn’t be difficult, not when she has her entire life before her. But it’s not life that preoccupies her thoughts. It’s death—and that shadowy spectre haunts her every step.

So does Mr. Knell. Heart-thumpingly attractive, obviously eligible—he’d be her perfect match if only he wasn’t so macabre. All his talk about death, all that teasing about knowing how to avoid it…

When her mother arranges a courtship with another man, Senza is desperate for escape from a dull prescripted destiny. Impulsively, she takes Knell up on his offer. He casts a spell that frees her from the cruelty of time and the threat of death—but at a steep price. In order to maintain eternal youth, she must feed on the heartbeats of others.

It’s a little bit Jane Austen, a little bit Edgar Allan Poe, and a whole lot of stealing heartbeats in order to stay young and beautiful forever. From the posh London season to the back alleys of Whitechapel, across the Channel, across the Pond, across the seas of Time…

How far will Senza Fyne go to avoid Death?

Posted by Ash Krafton | @ashkrafton at 5:42 PM No comments: Links to this post