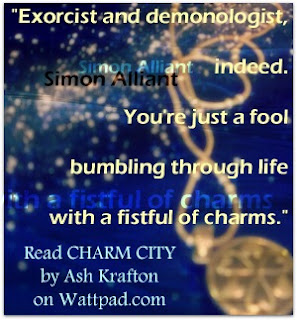 CHARM CITY is thriving on Wattpad.com!
Over the past few weeks I've been uploading chapters of my WIP urban fantasy over at Wattpad.com. It's an experiment in more ways than one: I've never posted a full-length story on Wattpad before, let alone something that hasn't been scoured and shredded by my trusted beta readers. So why am I doing it?
I think it has to do with the impulsivity of it all. Over the years, I've gone from a seat-of-my-pants writer to someone who has learned (and will never know all of) the craft of writing and the business in general. Every book I published took me farther along the path. Since my first publication upon my return to serious writing (a poem back in 2009) I've learned so much... and I've developed a lot of good habits and methods.
However, a certain element of impulsivity was waning.
I often think back to the first novel I started, one I wrote in secret during stolen moments when the ideas felt like they'd blow out the side of my brain if I didn't write them down. Those passionate bursts of inspiration truly kindled my happy writing habits.
But with time and growth and knowledge and training came more planning, more foresight, more structure. Less seat-of-my-pants.
It's a mixed blessing.
So... I'm giving myself a dose of impulsivity. (And it's so refreshing. Exciting. A little nail-biting, even.)
Unfortunately, I can't turn off the part of my writer's brain that is addicted to craves feedback. If you'd care to offer a comment on any of the chapters I've posted, I would really love to hear it. Really.
And if you like what you read, I hope you share it along.

CHARM CITY (The Demon Whisperer #1)
The darkness is rising and one man stands against it: the exorcist mage Simon Alliant. But in Baltimore, he finally meets his match...a part-mortal divinity with the power to whisper away demons.