Here's another spotlight on one of the SPELLBOUND authors.
Don't miss out on the $100 giveaway at the bottom of the post!
Enjoy...

Be SPELLBOUND by 20 full-length urban fantasy and paranormal romance reads.

Readers of all ages will be swept away by this fascinating mix of existing titles and brand new content, full of pages brimming with faeries, witches, vampires, shifters, psychics, greek gods, angels, demons, and even ghosts!

With over a million words of fiction, this is your one stop shop for urban fantasy, epic fantasy, sword and sorcery, shifter romance, vampire romance, elemental magic, time travel, and MORE from today’s New York Times, USA Today, and internationally bestselling authors!

Although some of these reads may be gritty and dark, this is a collection of clean reads that anyone will enjoy!

Secure your Limited Edition copy with one click today, and for a special treat, enjoy this sample excerpt from one of the authors in SPELLBOUND.


THE FOX, by Gaja K. Kos and Boris Kos

Maer Lakrius feels content and secure in his role of a second-born child in the royal household until the battlefield of Vanas rips his reality apart.

Helpless to prevent his older brother's death, Maer returns to the kingdom defeated, and must face not only the weight of his loss, but the burden of becoming Emberya's Crown Prince. A burden, made even worse by the changes in the world Maer believes only he can see.

Unknowingly, the young prince's fate becomes entwined with that of a woman—an 18-year-old mercenary with a past she would rather forget, and struggles eerily similar to Maer's own.

But with the continent and their different lives lying between them, will the Winds succeed in bringing the two individuals together or will the ethereal, dark tendrils of the world destroy them first?


There was nothing but the light wind weaving through the branches far above his head. The heat and humidity covered him like a blanket, the bitter fact that he would pass out in this very spot, his limp body waiting for the trainers to rescue him, since he was too stubborn to sound the horn just yet, transforming from fear into something that was almost tempting.

As if acting on some odd impulse, the prince closed his eyes and drifted into a half-dazed sleep.

A different kind of rustle than that of the steady breeze caught his attention.

Without dwelling on how much time he had lost, the prince gripped the bow, his finger already on the lever that would spring the mechanism to life. He leveled the weapon at the sound, his breaths perfectly silent as he aimed, and willed the last remnants of predatory sharpness into his mind.

Bushes swayed on the right edge of the clearing opposite where Maer sat, slumped against the tree. The prince exhaled, his eye aligned with the straight line his arrow formed as it waited to be released. Blood pumped in his veins, an unusual sensation, similar to adrenaline, but not precisely the same, spreading through his body—as if every single nerve suddenly came to life.

A dash of turquoise, reflecting light like the richest of silks, appeared among the greenery, and Maer’s hands trembled as the animal came into view.

Gaja J. Kos is an international bestselling author with the mission to breathe fragments of Slavic lore onto many, many pages of fiction.

Boris Kos is an international bestselling author and stage actor at SMG.

The Kos' reside in Celje, Slovenia, with their two Chinese Crested dogs. 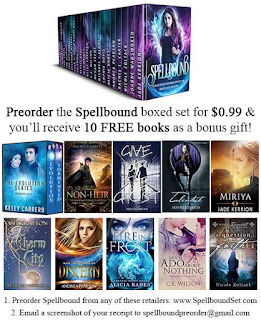 And... Enter the $100 gift card giveaway!
Click HERE to enter