I am a mythology junkie.

Always have been. Since junior high, I've been fascinated by the mythology of the ancient world...Roman, Nordic, Persian, Egyptian...and Greek. Definitely Greek. They had the coolest legends. When the rest of my friends were reading Judy Blume, I had my nose stuck in an encyclopedia.

(It may be hereditary, too, as my eleven-year-old son has a real thing for Greek mythology. Or...maybe it's Rick Riordan's fault. *shrug* He's even trying to learn how to read Greek. Good luck, kiddo.)

I'm not the only one fascinated by the realms of the gods and their cursed minions. One of my author friends, Joanna Parypinski, is just as much of a Greek geek as I am. She's proud to announce the release of her novel PANDORA.

Joanna is gracious enough to stop by and share a guest post on the wonderful world of gorgons and gods...specifically, on the myth of Pandora and her infamous box. Read on...

Long ago, in an ancient and magical world of gods and demons, Zeus ordered Hephaestus to create the first woman. The gods gifted her with clothes, beauty, and speech, and they called her Pandora. She was given a beautiful container and told not to open it, but naturally, her curiosity overwhelmed her. When she opened the box, all the evil trapped within it escaped and spread across the Earth.


The legend of Pandora is an iconic one used time and again in books, movies, television, and music—mainly as a cautionary tale. The idea of opening Pandora’s Box is now synonymous with creating some sort of evil that cannot be stopped. But what if there was an actual box, passed down through the ages, that contained all the evils of mankind? That’s the idea behind PANDORA.


Since the book centers around this legend, I decided to delve deeper into the bowels of Greek mythology to create the eerie, supernatural world hovering beneath the surface of the town.


I researched the genealogy of daemons, which are personifications of otherwise lifeless entities like night, sleep, madness, and even death. Nyx, born of Chaos, is the mother of all manner of dark creatures. You might find some of them lurking in the corners of the pages as you read PANDORA. In fact, all the elements of Greek mythology you’ll find in the book are rather sinister.


For instance, somewhere in the Greek underworld are two gates: one made of ivory, and the other of horn. The Gate of Horn produces true dreams, while the Gate of Ivory generates false ones. My interpretation of “false dreams” includes nightmares, which play a significant role in the book—especially with the character of Ben, who has been plagued by nightmares throughout his life. The Ivory Gate becomes important as we trace the ancient history of the box back to its distant origin.


The final bit of Greek mythology in PANDORA involves the creature that appears again and again: the fanged, blank-eyed woman graces the cover of the book, but you’ll have to read it to find out just who, or what, she is…


If you want to read it, why not get yourself a free e-book copy right now? First person to correctly answer this trivia question can get either a PDF or ePub version:


After Pandora opened the box in the Greek myth, what one thing was left inside?


Stop by Joanna's page at http://joannaparypinski.com/  to read more about her latest book, PANDORA, and be sure to enter her contests. Good luck! 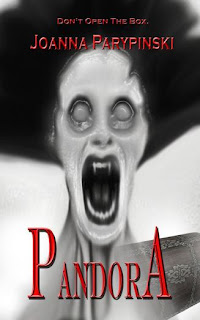 There’s something in the basement of Maria’s new house—something dark and primeval that made the previous owner commit suicide. It has infected the town of Sickle Falls, giving its inhabitants nightmares of a dark, fanged spirit that thirsts for blood. When Maria finds a mysterious ivory box buried in the bowels of her house, she must unearth its secrets before whatever is inside escapes and destroys them all.
Available at:
DAMNATION BOOKS
AMAZON.COM

BARNES&NOBLE.COM
Posted by Ash Krafton | @ashkrafton at 6:00 AM