Okay, kiddies, it's getting really close to Halloween and that means one thing... 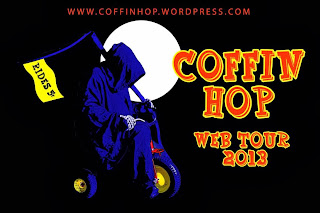 It's Coffin Hop time!
This year, we are Coffin Hopping for a cause...my fellow freaks at the Coffin Hop Corral have come together to produce a horror anthology called DEATH BY DRIVE-IN. All proceeds go to LitWorld.org to support children literacy.
It's not nice to scare the living sh*t out of children so we'll do the next best thing: teach them to read so they can scare the living sh*t out of themselves.
That's how I grew up, and look--I turned out just fine.
In the spirit of the hop, I have a giveaway for all ya'll.
I did a little Day of the Dead shopping on a recent vacation and, as usual, I brought home killer stuff. Gonna be hard to part with it...but I'll do it for the Coffin Hop team.
What You Win: 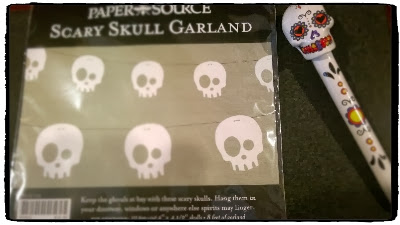 Skull pen and garland from PAPER SOURCE
How You Win It:
Simple...join my mailing list and leave a comment on this post saying you did it. And leave me a hint so I can find your email on the list.
(You can also feel free to say how awesome this swag is because I'm really wishing I bought two of everything that day. That garland is fricken CUTE.)
DEATH BY DRIVE-IN (2013) 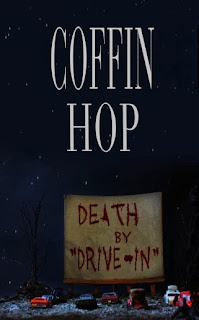 COFFIN HOP: DEATH BY DRIVE-IN is a collection of 22 amazing tales of terror by some of the best and brightest of the Coffin Hop crew. The anthology will be revealed this September, with 21 amazing B-movie inspired stories from some of the best Indie authors around. All profits from the anthology (as well as our Coffin Hop store) will be donated to LitWorld.org, a 501(c)3 non-profit organization supporting child literacy and social improvement the world over.

Special thanks to Siren’s Call Publications for their help with editing and formatting, and Liz Howerton Photography for the amazing cover art.

COFFIN HOP: DEATH BY DRIVE-IN is scheduled for release to coincide with the 2013 Coffin Hop Author’s Online Event, which you can learn more about HERE

There book features an introduction by cult horror filmmaker, author and all-around pop-cult expert Scott S. Phillips, and a special cliffhanger episode of the epic comic book phenomenon – Robot Lincoln and Zombie Jackson as they face the sinister Dr. Acula and his steam-powered supermen!