Lock and load your e-reader with 22 kick-ass HEROINES & HELLIONS...boxed set only 99c! #preorder

My newest novel TAKIN' IT BACK will be released in the Heroines & Hellions Boxed set in March 2018!!! Here's a peep at the cover... 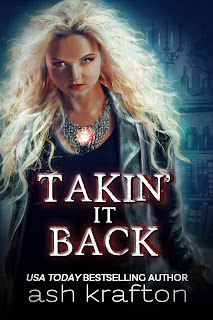 TAKIN' IT BACK
by Ash Krafton

Think there's nothing worse than becoming like your mother?
Try being possessed by her spirit.

Twenty-year-old Aerie hates running collateral recovery for her father’s magical supply shop. Repossession is a nasty business, even when you’re good at it. She’d rather be the store’s new Acquisitioner but Pop says that job’s for someone who finds things, not loses them. When a mysterious amulet must be found, Aerie sees an opportunity to prove her worth to him.

That’s when a spirit trapped inside the amulet possesses her, instead. Demonic powers are handy on a door-knock or when facing down one’s nemesis, but mages can’t use the demonic ley without becoming tainted. Worse yet, the spirit may be Aerie's difficult, dead-beat, long-gone mother.

The possession will destroy Aerie if she doesn’t get the amulet off—but the only person who can do that is the guy she repo’d it from. Mr. Probable Ulterior Motive believes if she finds some crummy old book she’d lost years ago, she may discover the spirit’s true identity and prevent its damnation. Aerie must entrust her fate to a complete stranger or let the demon get what it wants—and it wants Pop dead.

Gonna be one Hell of a family reunion...

You can PREORDER my latest novel NOW...and get 21 other kick-ass urban fantasy books with it!!!

That's because this new story is making its debut with the boxed set...
Heroines & Hellions: An Urban Fantasy and Fantasy Collection! 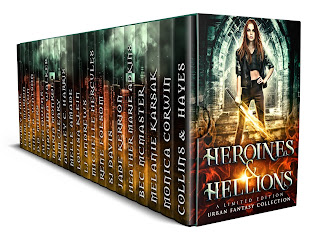 Do you like your leading ladies to save the day…or raze it?

No matter which you prefer, this set is brimming with 22 magical stories (many BRAND NEW) told by some of the leading voices of urban fantasy and fantasy in the industry, including several New York Times and USA Today bestselling authors!

If you want strong female leads who strike back against the captivating worlds of vampires, elementals, fiends, and paranormal monsters, then you’re ready to charge into the adventures of HEROINES & HELLIONS, a pure Urban Fantasy/Fantasy collection!

Grab your stake, silver bullets, and your limited edition copy of HEROINES & HELLIONS today!
PREORDER NOW FOR ONLY 99 cents!

Posted by Ash Krafton | @ashkrafton at 11:58 AM No comments: