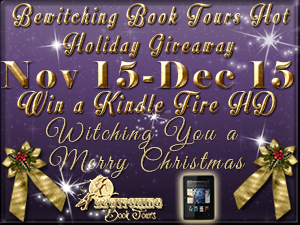 
3 Bewitching Prize Packs full of books and book swag goodies- open to US Shipping- prize packs may contain print copies of The Hallowed Ones by Laura Bickle, Would Be Witch by Kimberly Frost and Earth Angel by E Van Lowe, Paranormal Pleasures by Roxanne Rhoads, Tasty Christmas Treats by Roxanne Rhoads- books will be distributed among the 3 prize packs


1  e-book set of the first three books in the Seven Seals Series by Traci Douglass
1 Release, book 3 of The Angler series by Annie Nicholas
1 ebook copy Murder on Mars A New Orleans Mystery by MM Shelley


1  e-book copy of Operation Earth by Maria Hammarblad
1 Earth’s Requiem. Print if in the U.S., an e-copy otherwise.


1 one kindle copy of Cassie Scot: ParaNormal Detective by Christine Amsden
1 One ecopy of Cursed Ever After by AC James
1 copy of The Miss Education of Dr. Exeter by Jillian Stone


1 ecopy of Catwalk:Messiah by Nick Kelly
1 ecopy of Wucaii by Pembroke Sinclair


1 ecopy of The Bottom Line by Shelley Munro
1 Ebook copy of Dangerous Pursuit by Margaret Daly
a Rafflecopter giveaway
Posted by Ash Krafton | @ashkrafton at 12:30 AM 8 comments:

The Siren's Tale by Anne Carlisle

The Siren’s Tale
(Home Schooling #2)
Cassandra, a smart siren in human form, can have any man she wants. So long as she wants him dead. Told in part by the ghost of the main character, the story follows Cassandra’s headlong pursuit of passion in the hinterlands of the Old West, where she comes into conflict with a powerful curse, which passes down the generations.
Cassandra has phenomenal success in the silent film industry in California, but troubles remain. Her demon grandson is headed to Wyoming to wreak revenge for his father, the bastard son she abandoned. And the family is threatened by extinction, unless the youngest carries her illegitimate pregnancy to term.

Anne Carlisle, Ph. D., is a professor of writing and an award-winning writer. The Siren’s Tale is her most recent release, from LazyDay Publishing (June, 2013), available in ebook on Amazon, B&N, and ARE. It is the second novel in her Home Schooling series, literary/commercial fiction for paranormal-romance readers and New Adults. The series of stand-alone novels feature the exploits of lustful sirens in human form as they emerge into adulthood, spin their webs, and struggle with a family curse. Carlisle holds a doctorate in 19th Century British Literature from Case Western Reserve University. Currently Professor and Course Chair at the University of Maryland, she teaches college writing worldwide to U.S. military students. Formerly, while working as a newspaper columnist, magazine editor, and theatre reviewer, she authored a book on writing, wrote hundreds of articles, and was awarded prizes by the ANPA and the National Writer’s Club. She also served as a dean for Golden Gate University in San Francisco. She works from her homes in Seattle, Key West, and Wilmington, NC.

"The Sirens Tale:  Writing In the Shadow of Anne Rice and Ovid"


As a dare to myself,  five years ago I set down to write a novel. For decades I'd sworn I would never again attempt such a fool's journey.  Two published novels later (and one in the oven), I am writing this guest post. Thank you, Ash!

We all know about the undying interest in paranormal fiction, as reflected in television shows like Twilight and Sleepy Hollow.  But  back in 2008, the last paranormal book I had read was Anne Rice's "The Vampire Lestat." I soon realized the publishing world was full of vampires. Every agent listed fantasy and science fiction as books they wanted to take a look at. Who'd a thunk it?

I didn't want to write about vampires, but I wanted to use fantasy as an inventive way of exploring real women's issues -- finding the right mate, having children, finding fulfillment in a career.
I recalled being in a room full of dead-serious writers at Breadloaf, the grand-daddy of all writer's conferences.  Speaking of grand-parents, it was  some twenty years ago.  Joyce Carol Oates and Francine Prose were speakers.  Oates , looking and sounding like a frail Olive Oil, said she spun her huge tomes from a single word or phrase!

In a seminar, I said I thought Anne  Rice was right up there with many nineteenth century British writers.  (Owing to my  Ph. D. in British Lit, I am steeped in Dickens, Thackeray, Trollope, etc.)  There was a hostile silence in the room.  The moderator sniffed and made a cold comment about   "commercial fiction" not being in our purview. As a university professor, I was not about to be talked down to.  I said Anne Rice was a prolific and stylistically superior writer.  I myself would be proud to be compared to her, if I ever got a novel published.

Did I realize, the literary snobs told me, Anne Rice had published pornography under a pen name?
Well, I did get my novels published,  and  recently Joseph, a  professor of writing who was reviewing my book THE SIREN'S TALE, endeared himself to me forever by writing this: "It is reminiscent of Anne Rice's work,  Interview With a Vampire, only more life affirming."

Of course, these days we don't use that word "pornography"  just because there is graphic sex in a book. We even have legitimate genre names: erotica, erotic-romance, or paranormal erotic-romance. And unless we are selling to eleven-year-olds, we all look closely at our flame ratings, no matter how well educated or literary we are. But those were the days of the citadel, and the citadel is now over-run,  thanks to the internet, ebooks, self-publishing, and all the rest. And I'm running with the crowd, bad knees or no, fast as I possibly can.

Recall the movie "Bell, Book, and Candle" starring Kim Novak and Jimmy Stewart?  That's the territory I am settling into with my series on sirens in human form.  While some readers want more magic, others comment they like the mixture of human and siren  in THE SIREN'S TALE.  Heather says: "Anne does a great job showing the internal struggle that Cassandra has between her siren part and her human part. Her siren part is wanting to use her powers on men for her own advantage while her human part wants to have a man love her for her, with no tricks. "

I owe something to Anne Rice. Her vampires are immortal and my sirens are not, but what made Lestat so endearing  to me were his human qualities. Paranormals who are warring with other paranormals through an entire book aren't as interesting to me as those who seem, at the outset, to be just another human being, with a human being's problems. I always want to relate to the character, even when I am writing fantasy.  In particular, I want to relate to a female character, even if she is a siren.

Another reason why I'm writing about sirens is because it allows me to indulge my interest in classical literature. I didn't want to get bogged down in the ancient mythology; I wanted to create my own.  Nonetheless,  I read Ovid's Metamorphoses  cover to cover and took notes for the first time since I was a college freshman.  BTW, I  go into much more detailed siren mythology in the next book of my series, which has a working title of GHOST ORCHID, or School for Sirens.

Ovid tantalizes with creatures part human and part something else. He wrote in the days of the Roman empire, when rulers were still thought to be divinities and related to gods and goddesses who had human vices and interfered with human kind. Ovid got away with a lot of eroticism and paranormal fantasy under the guise of religion.  His marvelous epic in verse celebrates hundreds of gods and goddesses and their shape-shifting, gender-bending antics - "Of bodies chang'd to various forms I sing."

Here's what Ovid has to say about sirens. It isn't much.

The Daughters of Achelous transform'd to Sirens
.... But, o ye nymphs that from the flood descend,
What fault of yours the Gods cou'd so offend,
With wings and claws your beauteous forms to spoil,
Yet save your maiden face, and winning smile?....
The Gods were easy, and return'd your pray'r;
With golden wing o'er foamy waves you fled,
And to the sun your plumy glories spread.
But, lest the soft enchantment of your songs,
And the sweet musick of your flat'ring tongues
Shou'd quite be lost (as courteous fates ordain),
Your voice and virgin beauty still remain.

The other source is Homer’s Iliad, in which two sea nymphs, part woman and part bird, are referred to as “sirens.” Their exquisite singing and womanly appearance lured the homeward-bound Greek sailors under Ulysses to their destruction on perilous rocks. Hence, the biased connection between female home-wreckers and the term "siren."

In my mind, my sirens in human form are not necessarily home wreckers, and they may be living among us undetected. Are you one?

a Rafflecopter giveaway
Posted by Ash Krafton | @ashkrafton at 2:30 AM 2 comments: