Enter the world of the Demimonde.

Look outside your window. Same old town, same streets, same people, same stories you've lived all your life. Or... are they?

Sophie Galen is an advice columnist from the suburbs of Philly. Like many sensitive women, she's done her best to create a shelter for herself in order to live in a safe, predictable world, protecting her vulnerable self: her mind, her heart, her soul.

Then he came into her life and blew the walls in.

When Marek Thurzo arrived, he brought with him all the secrets she never wanted to know: the world outside was not what she thought. There were people and creatures and powers she'd never dared to believe exist and at the very center of this humongous supernatural web was one single person.

Her. The Sophia. The one hope for redemption for the Demivampire race.

Some days, she still can't wrap her head around the whole thing. Other days...

While meeting her deadlines, natch. Who says a girl can't multitask while saving the world? 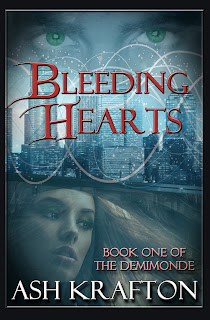 Bleeding Hearts: Book One of the Demimonde

Sophie Galen is an advice columnist who is saving the world - one damned person at a time.

Shy and sensitive Sophie has all but given up on love until she meets Marek, a mysterious stranger who seduces her with his striking good looks and his take-charge attitude. Yet the darkness she senses within him may be more than she is prepared to handle when Marek draws her into a world of vampires, werewolves, and treachery. Forced to leave behind the comfortable routines and certainties of her past, Sophie makes unbearable sacrifices and uncovers hidden truths about herself and the world around her. 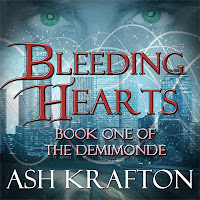 Bleeding Hearts: Book One of the Demimonde "will appeal most to readers who have outgrown Twilight but think the Anita Blake books are too salacious."
Publishers Weekly

"An emotionally gripping story that at times deceivingly reads like a light, airy beach read one second, only to surprise you with its depth the next."
GraveTells Paranormal Romance News and Reviews

"This novel is filled with light and dark, good and evil, and a love that is tested beyond all limits."
Author Tricia Schneider, The Wild Rose Press

"Fans of Molly Harper's Jane Jameson books and MaryJanice Davidson's The Undead Series will thoroughly enjoy Ash Krafton's story...With her excellent mythology and world building, the author has a hit on her hands!"
Shelly Bell, Author of A Year to Remember

"BLEEDING HEARTS, despite its superficial similarities to both Charlaine Harris's Sookie Stackhouse' books and Laurell K. Hamilton's' series, has something to offer that isn't done very often -- humor mixed with emotional depth and heart. If you have a fondness for urban fantasy...BLEEDING HEARTS will fill the bill."
Shiny Book Reviews 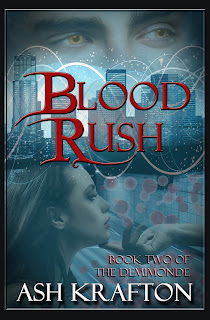 Sophie doesn't believe in happily ever after. These days, she'd settle for alive after sunrise.

Advice columnist and newly-appointed oracle to the demivampire, Sophie Galen has more issues than a Cosmo collection: a new mentor with a mean streak, a werewolf stalker she can't shake, and a relationship with her ex's family that redefines the term complicated. And then there's her ex himself, who is more interested in playing leader of the vampire pack than in his own salvation.

Becoming a better oracle is tough enough, but when Sophie encounters a deadly enemy - one she never dreamed of facing - it will take everything she's ever learned in order to survive. 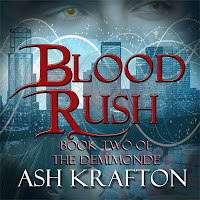 Blood Rush is an exciting tale of romance, mystery, and danger which will intrigue readers who find that the roses of romance are made sweeter and more compelling by the subtle tinge of blood.
Foreword Reviews

Despite being an urban fantasy about paranormal characters Ash Krafton has written a very human story which any reader will find a connection point in. This book is a 5 star MUST read...
Kirsty Vizard

Full of suspense, action, mystery, and the undercurrents of romance, the unique paranormal world that Ms. Krafton has created will keep you on the edge of your seat until the very last sentence...
Place of Reads

As a reader, you become part of this world, waiting to return with the next installment in the series...
Pure Jonel 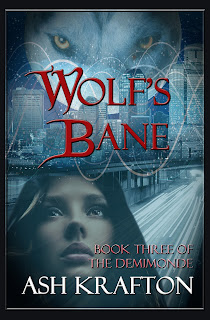 Sometimes, when life gives you lemons, all you can do is try to avoid paper cuts.
Since becoming oracle to the demivampire two years ago, advice columnist Sophie has battled werewolves and survived a vampire attack (or two). However, not only was she powerless to save her lover Marek when he slipped to the brink of evolution, she also witnessed his transformation into a falcon, the symbol of Horus United.

She’s supposed to be the girl with all the answers, but Sophie needs more than a little advice--she needs divine intervention.
Read Wolf's Bane today! 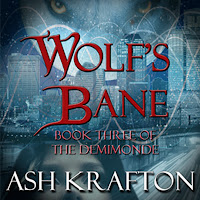 I was on such an emotional roller-coaster throughout this book but it was a great ride. I was irritated, mad beyond belief, bawling my eyes out, surprised, and happy while reading this book. I would happily re-read the whole series over and over!
--Brandi

The emotions that Ash Krafton invokes in her readers is phenomenal. I found it nearly impossible not to feel like I was inside the novel. Each expression of emotion, from elation, to despair and anguish, and anger just flourished as I became one with the book.
--Sapphyria

You end this book with such a strong connection to all characters you find yourself sad to leave them. Ash Krafton created another great book, an amazing conclusion to her supernatural series and such remarkable characters that I will never forget...
--Ner's Cup of Coffee and a Book reviews