You Never Forget Your First...

…vampire sweetheart, that is.

What is it about these creatures that haunt us, possess us, and draw us away from the well-lit safe places of our everyday lives?

Is it…eternal love? The promise of an eternity of dwelling in another's eyes, of being loved to the point of consumption. To quench the desire of someone who would starve without us. To become their life, their reason to exist.

Or…is it the danger, the rush of treading that silver blade between life and death, pleasure and pain?

But then again, with vampires, there is no "line between". Life and death, pleasure and pain, light and dark, good and bad. They are everything, all at once.

Heroes with unimaginable power, undone by a brush of sunlight. Strength and weakness, entwined.

No wonder vamps ensnare us: we do like our men complex, after all.

WELCOME TO THE V4V GIVEAWAY HOP! Be sure to enter to win...the entry form is at the end of the post...

I have to go back a long time to remember my first vampire crush. I cut my teeth on Anne Rice when I was in college. My boyfriend had an English assignment on Interview with a Vampire and wanted me to read it so I could help him with the paper. (Come to think of it, I read a LOT of extra novels in college for the same purpose.)

I balked at first. Vampires weren't my thing.

Then, Boyfriend turned big baby brown eyes on me and fluttered those long lashes. Seriously. He had eyes like the puppies on those rip-your-heart-out animal fundraiser posters. So, I heaved a sigh and read it.

I WAS BLOWN AWAY. Louis had such depth, such tragic humanity. And Lestat? What an ass. I hated him. He was cocky, he was mean, he was so in love with himself that he eclipsed the sun. That jerk had little regard for anyone else, no matter how much I wish he would.

I didn't realize he was setting himself up to be a Bad Boy. Uh oh. My first human crush was a Bad Boy. Unrequited love all the way for six solid years. I listened to more miserable music over him than I did for the boys I actually dated. That crush was my secret agony.

Lestat didn't disappoint. And, unrequited? Heck yeah. I still ache a little inside when I think of him (or when I see old Reutger Hauer movies.) I'd never invested myself in a character the way I did Lestat. I hadn't known it was possible.

It was tough but eventually I moved on and found other vampire crushes. Jean Claude: I never wanted him more than the way I did in the very first Anita Blake installment. That hint of a suggestion of a tease was a complete PHEROMONE. Eric Northman: I have not the words. (The suggestions, I got a million of them, but when I open my mouth, nothing comes out.)

There's Eric chum Bill Compton but he's off limits. That's Sookie's first vampire love. I understand the sacredness of that bond. Sookie needs to keep that all to herself, to keep it in her heart-shaped box and cherish it always. Eric, on the other hand, is free game. =)

Not all vampires aren't loveable. I know there are some really bad ones out there and some of them are downright Nosferatu. Some of them—like Still-Heart in my upcoming release BLEEDING HEARTS—are beautiful creatures but don't be fooled: inside is a demon. He may act like a Bad Boy but deep down, he's just bad.

In fact, all the vamps in my book are bad, bad, bad. But the Demivampire? Another story altogether. *wicked grin* 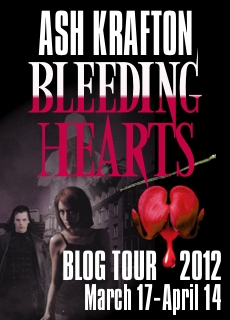 But don't worry…that story will be told when BLEEDING HEARTS: Book One of the Demimonde is released on March 15th through Pink Narcissus Press (http://pinknarc.com)

Follow this blog to stay up-to-date on release news—we'll be going on a Bleeding Hearts Blog Tour in March, with lots of fun giveaways and visits to incredible blogs.

And although the vampires in my book are better off left alone, there's plenty of crush-worthy vamps in countless other books to love. I mean, have you visited any of the other stops on this blog hop? ;)

Which leads me to…the CONTEST! I am nothing if not an enabler. Everyone has their own favorite flavor of vampire. It was really tough to decide what to give away on this blog hop. So I decided to give away a build-your-own-vampire-sundae of sorts by offering an ebook spending spree at Amazon!

You can enter to win a $25 gift card to that monstrous online bookstore—that way you have a little cash to pick up some of the other vampires you've met along this blog hop. The cherry on top of said sundae is an eARC of my soon-to-debut urban fantasy BLEEDING HEARTS: Book One of the Demimonde. You can visit my demivampires any time you want. ;)

What did I tell you? I'm an enabler.

You can enter to win my goodies by Liking my Facebook page. You can get up to three extra entries by following me in other places (you'll see the links on the Rafflecopter form.) If you've never entered a Rafflecopter giveaway, it's really easy: you sign in with either your Facebook profile or your email and just follow the easy steps to Winning Land. Good luck!

Your next stop is For the Love of Reading with host Niina C.! You can also return to the main page to visit the blog hop list.
Posted by Ash Krafton | @ashkrafton at 12:30 AM