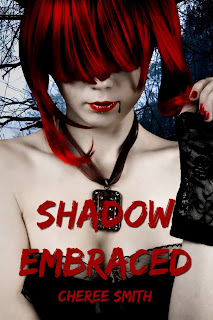 Thank you, Dark World Books, for introducing a new author and her book to the Demimonde blog! We are pleased to share Cheree Smith's new book on her cover release tour...SHADOW EMBRACED!
Shadow Embraced
(Haven #1)
No escape.
Those words haunt Scar’s dreams. She thinks the creature that terrorises her while asleep isn’t real, but when she’s abducted and taken to a reform school meant to contain creatures too dangerous to function in society, she starts to wonder whether she isn’t some monster.
She turns to an underground fight club full of vampires, werewolves and witches established by the students to control her urges, and who is she kidding, she loves to fight.
When fighters begin to disappear, turning Scar into the prime suspect, she must race to prove her innocence before her true nature is exposed.
The only problem is that she’s not entirely sure she’s innocent.

Cheree Smith
Cheree Smith lives in a country town in Australia as a high school English teacher where she writes paranormal, horror and dark stories for young adults. She enjoys listening to and learning about legends and myths, watching scary movies and dreaming up new worlds where monsters can come alive. When she is not in her writing cave she can be found listening to music, even dabbling in the occasional writing of music or reading.