Where in the world is ARCHETYPE?
﻿
﻿
﻿
I'm thrilled to be a part of MD Waters' ARC tour for her debut sci-fi thriller, ARCHETYPE. A copy of ARCHETYPE came to visit me at my home in Northeast PA for a few weeks while we got to know each other.
I don't get a chance to read a lot of science fiction. A shame, really, since I'm bonafide Nerdian, through and through. Star Trek, Doctor Who, Fringe...mmmmm...
Here's a couple pictures from our vacation here in the Pee Yay Coal Region...﻿﻿﻿﻿﻿﻿﻿﻿

﻿
First thing we did was go for breakfast. Most important meal of the day and all that, right? Poor ARC wasn't hungry, though, and I didn't want those pancake puppies to go to waste. (I have since decided that all pancakes must be spherical, loaded with chocolate chips, and smothered in peanut butter. Thank you, ARC-ARCHy.)

It was a tough job, deciding where to take the ARC. If you're from this area of NEPA, you'd know that we are in the middle of everything, surrounded by absolutely nothing. Nothing but history, really.

﻿
﻿
Mahanoy City recently celebrated its 150th birthday. This is an old mining town with a rich and colorful past that lies in the next valley over. I thought it would be a nice spot for a pic because the breaker, which ran from 1931 to 1963 and was one the largest in the world, is currently being demolished. It's old tech. There's new tech on the way--a new St. Nick's Breaker started running in 1972, just down the road, leaving the old one to be abandoned. I'll miss that old thing--it had a certain beauty to it, in all its broken windowed glory. 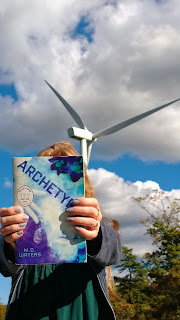 We don't just produce coal here...we farm the wind, too. Up the mountain from Mahanoy City stand the Locust Ridge I and II Wind Farms, which boast 64 wind mills. It's unsettling, sometimes, to be cruising along a hillside road when KABLAM a windmill pokes its head over the top of the mountain like a curious giant. I remember when the mills were being trucked into the area...tied up traffic like a tremendous pain in the dupa (local speak but I'm sure you can figure it out). I like the sound they make, a kind of humming whomph whomph whomph.

And, for these country parts, that's about as high tech as we get. ;D

The other shots are just to give a sense of how perfect this time of the year is--early autumn, when the leaves are just stating to change. It's a netherworld between seasons, when the grass is still green but the leaves are bleeding and beginning to swoon. Caught between life and death, early October precariously perches on a high wire, waiting for the perfect moment to fall.

Definitely my favorite time of the year. 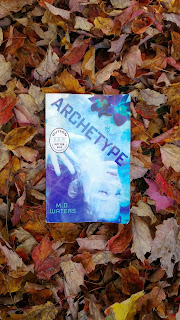 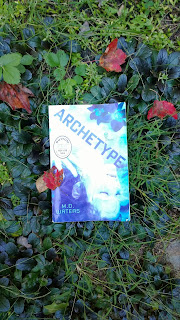 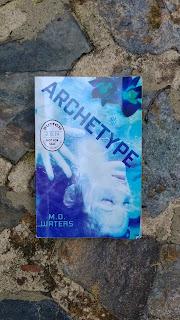 I really enjoyed reading ARCHETYPE and am looking forward to  the sequel, PROTOTYPE. The pacing is dizzy-fast and the characters are multi-dimensional. It was all too easy to get sucked into the story and I actually began to despair when I approached the ending. I didn't want the book to be over...
﻿ 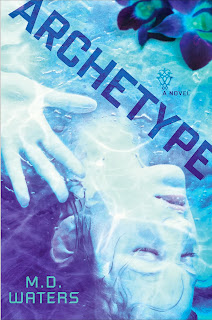 ARCHETYPE by MD Waters
Emma wakes in a hospital, with no memory of what came before. Her husband, Declan, a powerful, seductive man, provides her with new memories, but her dreams contradict his stories showing her a past life she can’t believe possible: memories of war, of a camp where girls are trained to be wives, of love for another man. Something inside her tells her not to speak of this but she does not know why. She only knows she is at war with herself.


Suppressing those dreams during her daylight hours, Emma lets Declan mold her into a happily married woman, and begins to fall in love with him. But the day Noah stands before her, the line between her reality and dreams shatters.


In a future where women are a rare commodity, Emma fights for freedom but is held captive by the love of two men—one her husband, the other her worst enemy. If only she could remember which is which…
Pre-Order ARCHETYPE!
Amazon   Barnes and Noble   iTunes   iBook   Indiebound 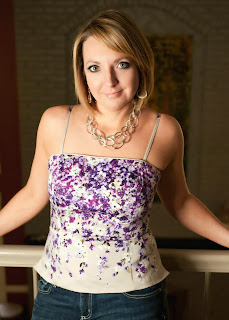 Meet  MD Waters
M.D. WATERS lives with her family in Maryland. Archetype (2/6/14 from Dutton Books) is her first novel. Its sequel, Prototype, will be published in July 2014. Ms. Waters is represented by Jennifer Weltz @ JVNLA.
Find MD Waters
Blog   Facebook    Twitter   Goodreads
Follow ARCHETYPE on its blog tour...
Next week's blogger is

WHERE IN THE WORLD IS ARCHETYPE? BLOG TOUR LIST