As a writer, I see words everywhere--images and events aren't just creations of light or sound or scent. They are words waiting to be written. I'm inspired by the music I hear and the places I visit. That's why I'm never without a camera or a notebook (or, these days, my Windows phone, which serves as both). Sometimes I get struck by an object, a vista, or a misheard lyric and I JUST HAVE to write something down.

Otherwise, I'm haunted by those words that missed their chance.

A lot of my poetry focuses on the conception (or misconception) of death. See, I don't see death as an end to be feared--I imagine it's a doorway to something new.

Everyday life is full of tiny deaths: endings, losses, changes. Those deaths aren't final. They are just the beginning to something different.

And aren't those wonderful things?

My spec fic heart romanticizes the shadows and the darkness and the tiny deaths we endure, leading me to those poetic endeavors. My books are urban fantasy and paranormal romance, often with dark twists. Poetry is a way for me to overcome writer's block--I can sometimes better express an aspect I'm trying to write for a novel by exploring it in a poetic manner. Once the lines are out of my head, I can get back to work on my book. Sometimes, a poem is left behind, much like a pearl, pretty irritations as they may be.

THE SCENT OF HIS FEATHERS will be released February 20, 2015 on Amazon Kindle. 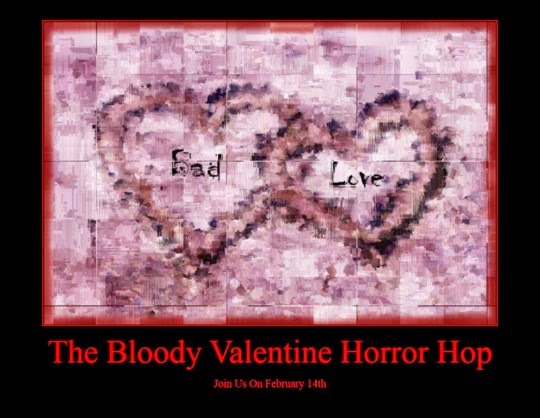 No better time to join a poetry hop, right?
Happy Bloody Valentine Horror Hop Day!
AF Stewart has put out a call for all the bad love we can muster today... so a bunch of us are getting together to share the stuff you'll never get on a Hallmark card. :)
In the spirit of good love gone bad, I'd like to share one of the poems from The Scent of His Feathers. It was originally published by Niteblade Fantasy and Horror and has always been a favorite of mine.
What’s for Dinner?
by Ash Krafton
She only ever smiles
and says, “Your favorite.”
And he beams at her, obviously thinking how lucky he is
to have such a doting wife
even though he plays around with the waitresses at the truck stop
and thinks his wife never finds out
and who cares, right? because those girls
never stay in town long enough to cause problems.
So lucky, lucky, lucky to have the best of both worlds.
She, on the other hand, is only too happy to
peel baby onions and carrots and pig potatoes
to put around the large, sumptuous roast
of questionable origins and morals
(roast beast, she said once, and laughed at her own joke,
earning a chuckle from the pandering bastard
as he cracked open his second beer. He hadn’t
even finished his salad yet, for chrissakes.)
This could never pass as a dish served coldly,
not when procured by such hot passions.
And she smiles—
she may not be his favorite,
but at least she's not left-overs.
In honor of the Valentine's hop, I will give away copies of my new poetry volume to anyone who would agree to read and review it on Amazon. Then (because there is always a surprise) everyone whose review is live on Amazon by midnight Sunday following the release (that would be Sunday February 22) will be entered into a drawing for an Amazon gift card, and the winner picked Monday February 23.

Enter the giveaway by filling out this form. Everyone who enters on this form will receive an electronic copy of THE SCENT OF HIS FEATHERS. You'll also receive periodic updates about upcoming releases, giveaways, and advanced reader copy opportunities.

On the Monday following the release, we'll pool all the readers who posted their review on Amazon and pick our lucky gift card winner!