A Magickal Samhain: Wands at the Ready!

The Magickal Samhain Reader Event will be held October 27 to 31. You can join us on Facebook at for author hosted events…pop in anytime! My spot will be on Thursday October 27th from 10:30am to 12 noon, EST. I hope you'll stop by for some book-filled holiday fun…

While we count down the days waiting for the spirits gather, I thought I'd get us into the mood with a post of a magickal nature… 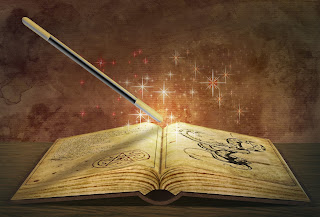 I have a wand collection.

Not surprising, since I'm a collector by nature. I started with stamps when I was nine. Moved on to stickers in the 80s because, hello? Lisa Frank!
Then it was books…then boots…coins…skulls and ravens…then wands, pretty much in that order.

I hadn't been seeking a new treasure to hoard when I started stockpiling wands. It just sort of happened. I had one wand, a black-and-white prop wand left over from my son's first magic kit. Kept it on my desk just in case. I wasn't obsessed, or anything.

But then, Harry Potter. Need I say more?

Suddenly, everyone had a wand. Kids everywhere were swishing and flicking their wands through the air like they just didn't care. Wands became common place, everyday things.

That was when I started collecting. That first trip to Universal Orlando did me in—we visited Hogsmeade and, during a show at Olivander's shop, y son was selected to play the part of a first year wizard. I think he blew up a flower pot and when he turned to look back at me, holding that wand in his hands, I knew it was coming home with us.

So did three others because my daughter, the hub, and I all had to get our own wands. On the trip back home, I knew—I knew—that all of them would be mine, mine, mine.

But it didn't stop there, with art replicas. I found wands everywhere I went. At the Pennsylvania Renaissance Faire. At the new age shop in downtown Gettysburg. On South Street in Philly. And, God bless it, all over the Internet. Every size and shape, color and design. It got to the point where, for the sake of space and sanity, I had to proceed to virtual collecting. (Check out my Pinterest page, btw…)

While my wands are mainly for admiration and creative inspiration, wands have been in use for millennia by countless cultures. The ancient Egyptians included them in burial goods. The Greek God Hermes carried a wand called a caduceus. Nordic shamans used them.

They were symbols of leadership and power: a queen's scepter. They were a mode of communication and command: the orchestra conductor's baton. They are an element of worship for practitioners of several religions, such as Wicca and Neopaganism.

They were also used by those who practiced ritual magic, by historically famous Magi such as Aleister Crowley or Dr. John Dee. Because of them, wand became widely known as conduits of magical power, and their fantastical uses found their way into legend and lore, onto page and screen.


In CHARM CITY, exorcist mage Simon Alliant has a lot of tricks up his sleeve—and one of them is his wand.

He's definitely not a swish-and-flick kind of guy. He's more about getting the job done because there's no room for flashy acts when you're trying to send a demon back to Hell. Magic is his juice, his power, his addiction. Hard not to get hooked on the stuff that lights you up…

Several years ago, Simon apprenticed with an English mage, a scholarly old gent who'd once had to put up with the ghost of Aleister Crowley (yep, that one.) Professor Kent was well-versed in the art of ritual magic and had introduced Simon to the wand.

No swishing and flicking, though. Unlike stage magicians or high priests, Kent took a very utilitarian approach to wand craft. He devised a unique charm, tailor-made for our boy Simon.

The wand was used to activate Simon's strongest amulet, which was inked into the skin on the bend of his left elbow: his runic tattoo.

And when Simon took a wand hit, it was like mainlining the purest of magic. Oh, the trouble he could get into when he hits the juice…


You can find out more about Simon and the demons he faces in CHARM CITY: The Demon Whisperer #1. (It will be on sale for only 99 cents October 27-31 but you can grab it FREE anytime on Kindle Unlimited!)

I really enjoy exploring wand lore (and fantasy) when I'm writing this series. So, if you ever stop by and find me fooling around with one of my wands, at least you'll know why. Definitely not floating feathers :) Just wondering where Simon's wand will take him next.

Stop by the Magickal Samhain Facebook page to RSVP...that way, you'll get a reminder when the event is about to start...and you won't miss a blessed thing.

AND DON'T FORGET! The October Giveaway page is loaded with goodies...check it out HERE!
Posted by Ash Krafton | @ashkrafton at 9:00 AM