Today I'll be sharing an excerpt from my latest urban fantasy, CHARM CITY: The Demon Whisperer #1.

Simon Alliant is a mage exorcist who's doing his share to clean up the streets of Baltimore. Only thing is, it's a mess not too many people get to see...

He's got the Light on his side: Mack, an Angelic Watcher, has become his handler, more or less. But when it comes down to pushing up his sleeves and digging into the actual work, he's on his own.

Until he meets Chiara... 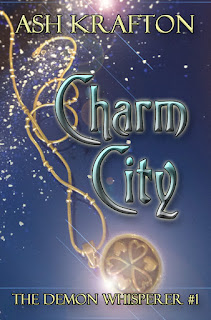 Chiara pushed her drink away. "Look, it’s been a long day. My correction may have looked like a bunch of simple whispering but I’m drained. Thanks for the drinks."

"I insist. Look, if I have to bind you here…" He reached into his pocket and pulled out a fistful of charms, picking through them.

She narrowed her eyes.

"If I have to try to bind you…" he amended, feeling a bit sheepish.

She exhaled through stiff lips as if she were trying to push away a strong impulse. "Fine. Just—put those away before someone gets hurt."

He grinned and put his gear away, hands up to show his surrender. "Better?"

"A little. But I'm going to ask the first question. What business to you have with that angel?"

Eh. Of course, she'd go right for the million dollar question. He scratched his head and felt his way around an answer.

A child of the Light has one foot in the darkness. Mack's words echoed through his memory, a replay of a previous heraldic message. Vague enough, but he couldn't tell it to her. Not that he wouldn't, but honestly couldn't.

When he tried, a sudden alien force gripped his voice, restraining the words. The ward was a condition of the message. Kind of a divine need-to-know. And as far as Simon knew, he was the only one who needed to know.

Finally, he got something to come out of his mouth.

"It's complicated," he said.

"That much is universally understood. No? Don't want to 'talk' so much, huh?"

"It's not that. Dealing with angels can be…tricky. I don't talk to people much, either. Sometimes I forget what I can or can't say."

"A ward?" She glanced at him and nodded. "Makes sense. No worries. I know the rules. But it's not just that angel lolloping about that concerns me. It's his lolloping about a man like you."

A man like him? Comments like that were always a bit double-sided. He was more or less programed to see the dark side of things. He frowned, immediately on the defense.

But then the wall crashed in.

His reply was lost in the barrage of glass and stone and wood that flew in all directions. He spread open his jacket, shielding Chiara and pushed her down, behind him, before scanning the scene.

The front end of a blue Ford F-150 had bellied up to the bar.

The bartended, Bobby, had taken the impact hard, knocked backward onto the center counter, dazed but alive. The dislodged cash register hit the floor with a clatter that was dwarfed in the shower of brick and debris pouring from the gaping hole in the wall.

A bearded man slumped out of the driver's side window, his neck bent at an ugly angle. Black smoke leaked out of his gaping mouth, his bloodied ears, and snaked its way over toward Bobby, who lay helplessly sprawled over the counter.

"No. No, no. Bobby!" Simon reached into his inside pocket, feeling for a soul-lock charm. Not there. It must have fallen out.

He boosted himself up and rolled over the bar, digging through the upset garnish tubs. Lime. Cocktail onions. Perfect for protection spells. All gone, lost in the mess of ice and glass and splintered bar.

"Simon!" Chiara was on her feet. "Get out of there before you get tagged!"

He ducked out of the way of the black vapors, stepping a wide berth around them.

The smoke curled into Bobby's nose and mouth and the man rolled his head, rousing. His eyes blinked open. His pupils glowed a sullen red that spread and quickly engulfed the entire eye.

The voice that came out of Bobby's mouth was not Bobby's.

ALLIANT. The voice was like a screech of metal under the roar of a massive waterfall. I'VE BEEN LOOKING FOR YOU.

Read more of CHARM CITY...FREE on Kindle Unlimited!
The first in a new Urban Fantasy series...
Find it on
Amazon | Goodreads 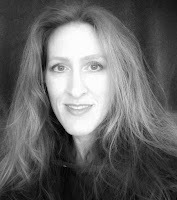 Ash Krafton is a speculative fiction writer from the coal region of Pennsylvania. She's the author of numerous urban fantasy and paranormal romance novels, as well as collections of poetry and short fiction. Must be something magic in the water there in PA...after all, those folks can actually *set rocks on fire*. If that ain't magic, we don't know what is. Visit her at www.AshKrafton.com to see what laws of reality she'll be bending next.

See who else is playing in the dark...
click on the link below to get hopping!


And don't miss the other giveaways you'll find when you click on the October Giveaways tab up above or click here for a handy shortcut :)