Interview with Alex McGilvery, one of the authors of BEYOND THE WAIL

Beyond the Wail: 12 Grave Tales of Love and Loss
What is it about fear and the unknown that pulls so passionately at the human heart? Perhaps we are drawn not to the darkness itself, but to the resolution, the overcoming of what we most deeply dread. After all, the more terrible the struggle, the greater the victory when it comes at last. Presented in this anthology are twelve remarkable stories of the darkness that overshadows us, and the resolution that may be found beyond them. They are stories of fear and oppression, but ultimately stories of hope, stories that will take you BEYOND THE WAIL.
Beyond the Wail is available at


OF MICE AND MONSTERS by Tirzah Duncan: Troubled by ghosts within and without, Benjamin struggles to become the man his girlfriend needs instead of the monster he is.

GO GENTLE by Julie Barnson: After the death of her boyfriend, a young musician uses her talents and a fabled violin to stop the fatal accidents at a dead man’s curve.

DEAD WATER by Amanda Banker: A stalled truck, an abandoned graveyard, and a town not found on any map take two brothers on a detour they’ll never forget.

COLD SPOT by Jay Barnson: When a laptop is stolen from their computer security company, two high school buddies go to extremes to investigate. But, will they manage to return?

THE WEEPING LADY by A. F. Stewart: Eva Douglas must face her mother issues, past and present, when the disappearance of her sister forces a confrontation with a terrifying ghost.

THE POLTERGEIST AND AUNT BETTY by Ginger C. Mann: Aunt Betty is eccentric, but how much is ghost, how much is medication, and how much is just plain crazy?

THE ‘GRIM’ REAPER by L. K. McIntosh: When a soul reaper loses the source of their power,
they must either find the witch who stole it or a new purpose for living.

SHRINE OF MIRRORS by F. M. Longo: A spy on a mission becomes a believer in the supernatural when the theft of three ancient relics threaten to bring down the empire.

DEAD MAN HOCKING by T.N. Payne: A world-weary zombie learns to beware what you wish for, and not all sure bets are worth the gamble.

ST. PETER’S FISH by Alex McGilvery: Sam is a walking disaster of biblical proportions, but how much is he willing to sacrifice to escape, and will the Powers That Be allow it?

THE DIORAMA by Sebastian Bendix: A play set turns life around for Martin Taper, but things take a turn for the worse when he neglects it and the lonely child obsessed with it.

DATE DUE by Danielle E. Shipley: A magic library’s guardian determines to protect her treasured books, whether their authors elect to do things the easy way … or the fatal one. 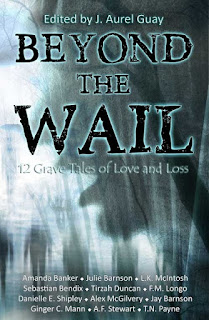 Interview with one of the authors from BEYOND THE WAIL... Alex McGilvery!

How did you come up with the concept of your story? This one started as a challenge. I was responding to a blog stating never start a story with the weather. I posted the first couple of paragraphs and got a good response. When the contest came up I knew it was time to finish the story.

How did you come up with the title?The fish in the story burps up gold coins. It is a direct reference to a fish Peter caught to pay taxes.

Please provide some insight into or a secret or two about your story.In the first iteration of the story the climax is a bar fight in Toledo and God is a biker. That either needed a full novel to deal with, or a switch to a heavy comedic tone. I shifted it around to match better with the contest.
What was the most surprising part of writing this book?The fork. I had no idea that blasted fork was going to show up and confuse everyone. In the end I like the concept.

What was the hardest part of writing your book, and how did you overcome it?The biggest challenge was not to overdo the voice of the story. It would have been so easy to fall into writing the lilt instead of the story. I kept being reminded the story came first and making the words serve the tale, not the voice.

What are some of your other published works? In order of publication, The Unenchanted Princess, Playing on Yggdrasil, Sarcasm is my Superpower, By the Book, and Sparkles and Blood.

What is your advice to writers?Write. Really. You aren’t a writer if you don’t write. Then find someone to help you deconstruct your writing to help you make it better. Then write some more.

What's up next for you? I’m bringing out another collection of novellas in November called The Heronmaster and a middle grade book for Christmas called Unboring the Princess. I’m also resubmitting a fantasy novel which is the first in a trilogy. I’m in the initial planning stages of a collection of my romance stories called ‘Romantic Shorts’. 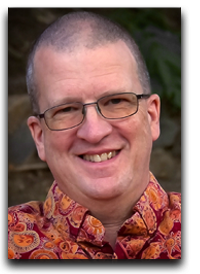 About the Author: ALEX MCGILVERY
Alex McGilvery is an author living in Flin Flon, Manitoba with his wife, Alex, and three dogs. He has been an avid reader all his life and wrote novels in his early teens. He has been writing short stories and poetry ever since. In addition to his first twenty-year work, he writes a novel every year through NaNoWriMo and another with the 3-Day Novel contest. He also writes reviews, specializing in indie authors, and works on short stories for contests.

He has now published five books, most recently Sparkles and Blood, a collection of horror novellas, edited an anthology along with the Flin Flon Writers Guild, and continues to be active in the Guild. In order to pay for his writing habit, Alex works full time as a minister in the United Church of Canada. Some of his parishioners wonder at the occasionally dark and twisted nature of his writing.