Welcome to my stop on the PROUDLY PARANORMAL BLOG HOP!

Once upon a time, I came across a bit of wisdom that went along the lines of: "Truth is stranger than fiction...because fiction needs to make sense."


Boy, were they were right.  Ever come across an inconsistency or an inaccuracy or flat out WTF? moment in a novel?  It just knocks you right out of the story.

Or what about those last minute plot rescuers that sound like "...and then an uncle whom everyone thought was dead shows up out of nowhere and saves the heroine with his riches."  A little too convenient, in my opinion. It leaves me shaking my head and dreading the next crazy plot twist.


I also know I'm the rebel kid who broke rules for no other reason than to see them broken.


My mom called me a "non-conformist".  I just agreed with her because I didn't know what the word meant. In hindsight my mom was right nearly 100% of the time so I'm glad I just went with my gut instinct and believed her. Eventually non-conformist became my motto.


So why would I want to break such a lovely rule? Just the rebel in me, I guess. But even I can't bring myself to cross that line.

Maybe that's why I'm one of the proudly paranormal.  Writing paranormal fiction allows me to get as close to possible to breaking that rule without actually doing it, thereby preventing a situation that might make my readers want to hurl things at me.


Sure, truth is stranger than fiction...but when it comes to paranormal fiction, it's sometimes hard to tell.


The paranormal genres open up doors to cellars and attics and dungeons not usually visited by mainstream fiction.


Heroes are sexier and stronger, villains are more dangerous, heroines are able to tap into strange powers to overcome their obstacles.


And paranormal fiction isn't just about mythical beasts -- not that I ever get tired of reading about vampires and werewolves -- it's psychic phenomena, ghost encounters, journeys to other dimensions or planes of existence. Heck, it's even teenage Grim Reapers.


Sure, there are still rules to writing fiction like that, but in a paranormal, you get to make a lot of those rules up as you go along.

That's part of the reason why I love writing paranormal fiction. There's no limit to my imagination. I have complete control over the world I'm building and if I want magic rocks in my world, or a royal lineage of German Werewolves, or crabby genies who seek psychiatric help, all I have to do is write it.


Sure, sometimes there are last minute plot rescuers that sound like "…and then her uncle sprouted horns and a tail and he breathed fire and saved the heroine" but that might actually make sense in the story. It's paranormal, after all.

Truth is, when it comes to paranormal writing, sometimes strange fiction is better. 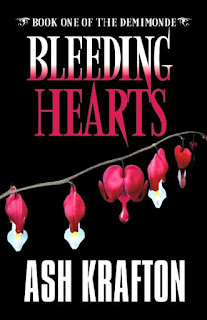 BLEEDING HEARTS: Book One of the Demimonde...

Saving the world one damned person at a time—shy advice columnist-turned-oracle must find a way to save her dangerous demivampire lover from the fate that threatens each of his race: evolution and the destruction of his soul.


When advice columnist Sophie meets dark and alluring Marek, she learns life-changing secrets about them both—he’s a demivampire struggling to avoid evolution and she’s an empathic oracle destined to save him. Sophie possesses the rare ability to reduce the spiritual damage that causes a demivamp to Fall, making her the only thing that stands between a DV and evolution. However, as Marek's dangerous past propels him toward his desperate fate, his enemies make darker plans for him: once vampire, powerful Marek would be second only to the Master himself. The vamps want to cause Marek's Fall and they intend to use Sophie to do it....

Next up... everyone's favorite Adriana Ryan. Be sure to visit her when she blogs on March 24th!


Each of the authors participating in this blog hop has super cool, ridiculously exciting prizes to giveaway. They’ll also be talking about their books and how you can win a copy! Check out the list below to see when and where you can visit your favorite writers!

Chastity Bush will be giving away one of her books, reader’s choice!
5. Krista D. Ball: WEDNESDAY March 7th

Krista will be giving away a copy of her e-book, Sprits Rising!
6. Wren Emerson: THURSDAY March 8th

Wren will be giving away a copy of her YA novel, I Wish… She’ll also give away a collection of short stories based in the same universe!
7. Janie Franz: SATURDAY March 10th

Janie will be giving away an e-copy of her book, Ruins Artifacts!
8. Dianne Hartsock: MONDAY March 12th

Dianne will be giving away e-copies of her book NATHANIEL!
9. Jan Fischer-Wade TUESDAY MARCH 13th

Jan will be giving away a $20 Barnes & Noble Gift Card for one person and one free copy of Veiled Virtues to another person!
10. Rosalie Skinner WEDNESDAY March 14th

Rosalie will be giving away a copy of Book One in the Chronicles of Caleath–Exiled: Autumn’s Peril or reader’s choice if they have read Book One!
11. Sky Purington: THURSDAY March 15th

Liv will be giving away a couple paperback versions of A Vampire’s Deadly Delight, as well as a PDF copy, and a Smashwords code for a copy of Bites – Ten Tales of Vampires!
13. Rebecca Ryals Russell: MONDAY March 19th

A.H. Browne will be giving away coupons for a free download of her book, Dark Illusions, from Smashwords!
15. Marsha A. Moore: WEDNESDAY March 21st

Marsha will be giving away a copy of her e-book, Seeking a Scribe: Enchanted Bookstore Legend One!
16. Alexandra Kane: THURSDAY March 22nd

Ash will be giving away e-copies of Bleeding Hearts: Book One of the Demimonde & a Barnes & Noble gift card!
18. Adriana Ryan: SATURDAY March 24th

Adriana will be giving away a $10 Amazon gift card and an e-copy of her novella, Her Heart’s Desire!
19. Savannah Chase: MONDAY March 26th

Savannah will be giving away a copy of her e-book, Bid For Love!
Posted by Ash Krafton | @ashkrafton at 3:00 AM